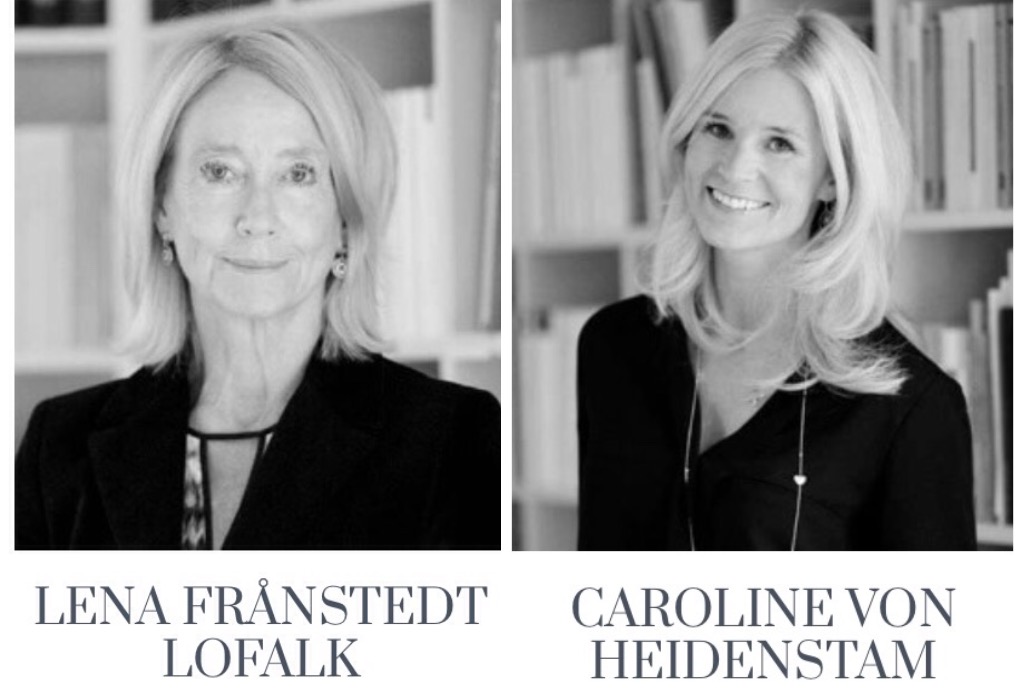 When a court case witness commits suicide after feeling he has been pressured to lie under oath to cover up fraud, legal counsel and advising lawyers become liable for negligence. If at the same time the lawyers engage in corruption, discrimination, in addition to desperately tracking and unlawfully monitoring personal activities of their clients' opponent, wilfully violating their clients' opponent’s personal life, the lawyers breach the code of ethics and seriously violate the principle foundation of their profession, under which lawyers must show moral integrity, honesty, and professionalism. Such lawyers face the risk of being barred from practicing law.

In a letter of 7 February 2019 to BUMP's founder Derek Banner, lawyer Caroline Kean, partner at UK law firm Wiggin LLP representing television and production company Endemol Shine Group / Banijay Group that owns Scandinavian Endemol Shine Nordics (previously known as Metronome and now Banijay Nordic), and Swedish format company Friday TV, confessed that Metronome and Friday TV's Legal Counsel Eva-Lotta Almkvist and their Swedish lawyers at law firm previously known as Foretagsjuridik Nord & Co Ab (now called Kanter Law firm), downloaded files with contents from BUMP's website which "Legal Counsel secured for use in evidence". And Caroline Kean falsely claimed that the "preserved or secured files for use in evidence were put in court proceedings in the English and Swedish courts", however she has been unable to provide any document from the court proceedings to prove her false claim. Instead, evidence of internet links, URLS, discovered from Friday TV and its Legal counsel's server called Mutter Media show that Legal counsel used the downloaded and secured files from BUMP's website as "Agreement Documentation", meaning "Agreement evidence", in the agreement documents that she quickly created between Friday TV and BUMP as soon as BUMP had caught Friday TV unlawfully exploiting its gameshow format "Minute To Win It" together with NBCUniversal and Endemol Shine. Caroline Kean deliberately lied to BUMP in her letter with the intent to deceive BUMP from pursuing its claim to her clients of more than $30 million in unpaid royalties.

Caroline Kean's revelation about the "downloaded and secured documents from BUMP's website", and her false statement that the preserved documents were put in court proceedings in London and Swedish courts, is a direct proof that she and her Swedish colleagues at law firm Nord & Co withheld and concealed documents of  high evidentiary value to deceive the court in Sweden and England in order to obtain court decisions in favour of their clients.

BUMP discovered in September 2011 evidence of two internet links, URLs, stemming from a server called Mutter Media which was used by Metronome and Friday TV and their Legal counsel Eva-Lotta Almkvist. The links were discovered soon after BUMP confronted Friday TV and sent an email to inquire about Friday TV's infringements, and Friday TV informed in its email response that their Legal counsel Eva-Lottal Almkvist "will get back to you". Legal counsel thus quickly created the agreement documents in order to purchase the rights to the gameshow "Minute To Win It" from BUMP, a world success gameshow aired the first time in March 2010 by NBC in the United States and later sold to more than fifty countries by NBC And Endemol Shine / Banijay Group. The created agreement files were in Swedish language, and below is their evidence, discovered from Friday TV and its Legal counsel's server called MUTTER MEDIA: 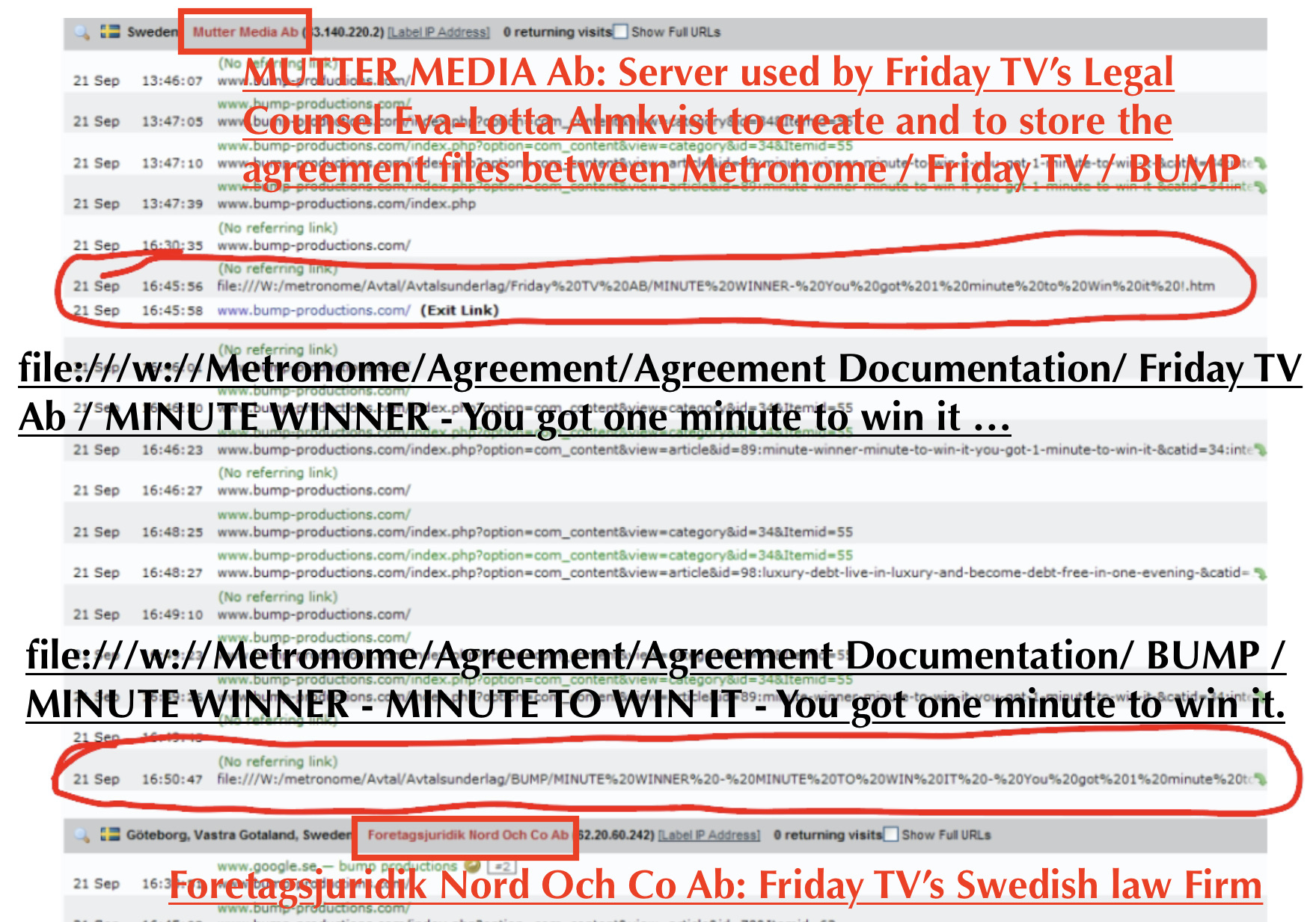 Friday TV's Legal Counsel Eva-Lotta Almkvist confirmed the discovered URLs evidence and the created agreement documents when she said "You broke into our server!" as soon as BUMP confronted her with the evidence, she directly revealed that the agreement documents existed and were kept on her and Friday TV's server.

Caroline Kean at Wiggin LLP in London also confirmed the discovered URLs evidence in her letter to BUMP when she stated: "The URLs show that there was a download of files with contents from the BUMP Productions website by Mutter Media and Foretagsjuridik Nord & Co. Legal counsel wanted to establish what your website said and preserved the files for use in evidence". And also during a phone call with BUMP after summary judgement she asked "Why don't you sell your format to Endemol Shine?". She thus directly recognised BUMP's ownership of the "Minute To Win It" format.

Caroline Kean and Friday TV and Metronome's Swedish lawyers Caroline von Heidenstam and Lena Frånstedt Lofalk at law firm Foretagsjuridik Nord & Co were fully aware that there should be no dispute and the case was never supposed to go to court in light of the agreements which Legal counsel established between Friday TV and BUMP with regard Minute To Win It, but they nonetheless hid the agreement documents and forced the matter before the court and wilfully abused of the court process to commit fraud.

In Denmark, Metronome's lawyer Kasper Frahm, at Danish law firm Plesner, also lied under oath during a court session in Danish City Court on 23 March 2015 after BUMP filed for the securing of the discovered agreements evidence. Kasper Frahm falsely claimed during the court session that the agreement documents had been created by an "IT employee" of Metronome (an "IT man," he said). His false statements were however directly contradicted by UK lawyer Caroline Kean when she revealed in her letter to BUMP on 7 February 2019 that "there was a downloaded of files with contents from BUMP website" which the discovered URLs evidence from Friday TV and its Legal counsel's server has shown that they were used as "Agreement Documentation" in the agreement documents Legal counsel created. And in an email of 22 December 2014 Danish lawyer Kasper Frahm requested for "a settlement proposal", which he would discuss with his client Metronome. And once during a telephone court hearing Kasper Frahm also asked "How much do you want?" to BUMP´s founder, in presence of Danish judge Claus Forum Petersen and lawyer of TV3 Denmark Karen Rønde.

Kasper Frahm's false statements to the judge in Copenhagen city court constitutes perjury and fraudulent misrepresentation, and it indicates a deliberate intent to mislead and to deceive the court in order to obtain a court judgement in favor of his client, Metronome. It is yet another proof of their orchestrated efforts to defraud and to deceive BUMP in order for their clients Metronome and Friday TV to avoid to pay royalties for their exploitation of BUMP's successful TV formats "Minute To Win It" and "Luxury Trap" (Lusksusfælden, Kyxfällan). Making false statements in court is a crime described in sections 158-160 of the Danish Criminal Code.

By urging their clients, Friday TV, Metronome, Endemol Shine Group / Banijay, to hide the agreement files and to commit fraud, Caroline Kean at Wiggin LLP and Swedish lawyers at Nord & Co / Kanter law firm Caroline von Heidenstam and Lena Frånstedt Lofalk, are in beach of lawyers' code of ethics, and their conduct is against the dignity and the reputation of the legal profession.

BUMP has suffered tremendous damage and loss of more than $30 million dollars in unpaid royalties because of the lawyers' misconduct and dishonesty.

Swedish Choir Leader Caroline Af Ugglas was paid royalties and profit share by Metronome and Friday TV for her verbal idea of the TV show "Clash Of The Choirs", "Körslaget", which in 2007 Friday TV developed and sold to NBC in the United States. The TV show was later distributed in seventeen territories. Friday TV's CEO and co-founder Estelle Bodén (formerly know as von Shinckel) said the following in 2008 in an interview with the Swedish press: "She came with the idea and she gets a percentage of profits." Swedish Caroline Af Ugglas, who rightfully has published on her website (http://carolineafugglas.se/biografi/) that she is the rights owner of "Clash of the Choirs", was never victim of the same royalty fraud as BUMP and its founder Derek Banner have experienced for their gameshow "Minute To Win It", which has been adapted in seventy territories around the world by Friday TV, Metronome, Endemol Shine and Banijay Group, and was awarded the title of world's most sold gameshow in 2011 and 2012. Nintendo version of Minute To Win It, Kinect, XBox, Wii, Boardgames, etc have also been made and sold online.

Besides defrauding BUMP of royalties for Minute To Win It, lawyers of Metronome and Endemol Shine also urged their clients to commit fraud with regard to "Luxury Trap", "Lyxfällan" in Sweden, which is another format BUMP submitted to Metronome Group, Friday TV, and to TV3 VIASAT since 2006. Metronome, Friday TV, and TV3 have exploited the format since 2006 and are still exploiting the format for now more than 80 seasons combined in Sweden, Denmark, and Norway without license or payment of royalties to BUMP and its founder. The two lawyers produced forged documents in Swedish court and have registered the trademarks Luxury Trap and Minute To Win It in their clients' names without permission from BUMP.

BUMP is seeking compensation and damages from Friday TV, Endemol Shine and Banijay Group and their lawyers. 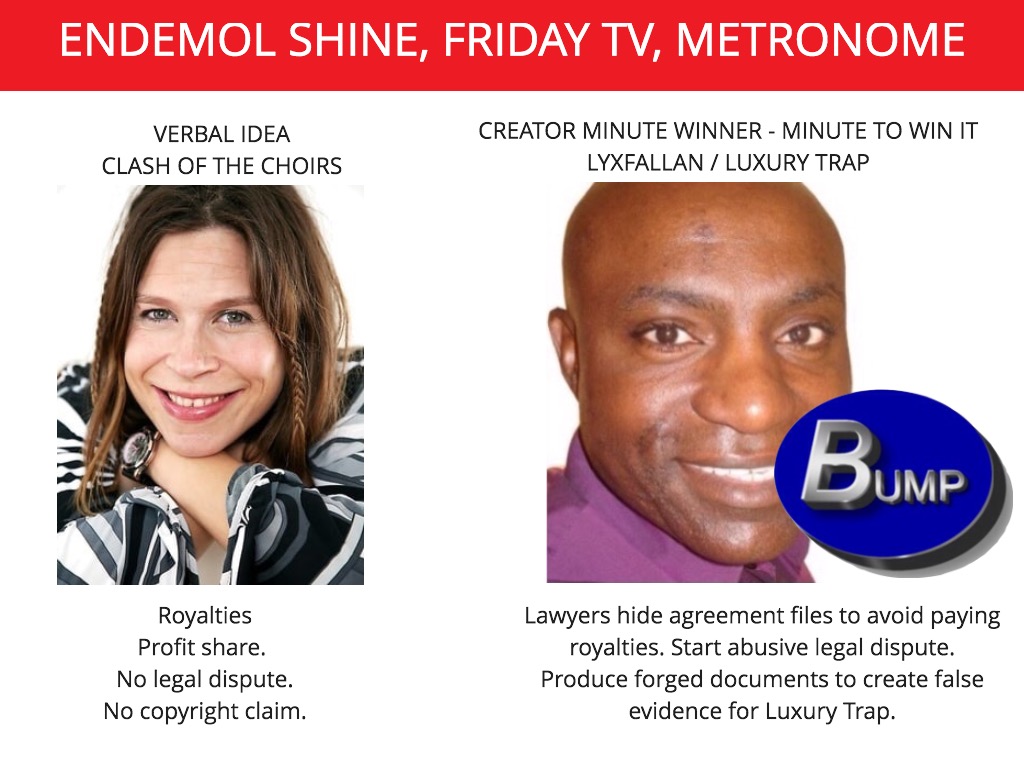